Liposuction is a cosmetic surgery procedure that allows to easily and permanently removing localized excess fat in different body areas.

Fat deposits in some areas of the body can give an unsightly appearance.

Liposuction is a cosmetic surgery operation that aims to reduce the fat in certain areas of the body to make it more harmonious.

Liposuction is an effective and radical treatment for excess of fat at the saddlebags, hips, thighs or tummy (abdomen). Not a treatment against obesity, liposuction is rather a modeling figure and a sculpture forms for both men and women. It thus helps to get rid of fat deposits that are resistant to diets and sports exercises.

This liposuction technique is outstanding and allows both men and women to sculpt their silhouette.

However, the application must be realistic: liposuction is not a treatment for obesity or a cellulite treatment.

This body contouring surgery does not deal with obesity or cellulite but it reduces the unsightly appearance of somewhat harmonious body.

Sometimes dieting or doing sports is not enough to obtain a harmonious silhouette. The fat excess can be localized and even significant weight loss cannot solve the problem. It is in these cases that liposuction has its best indications.

In case of localized excess of fat, liposuction can reduce this excess of fat, in a radical and definitive way, to achieve a harmonious and aesthetic body.

Liposuction, also known as liposculpture or suction assisted lipectomy, is a surgical procedure that is performed to remove excess fat; this is not a treatment for obesity!!

The principle of liposuction is to enter through small apertures skin foams cannulas, blunt rounded ends, having at their ends a plurality of orifices, these cannulas are connected to a closed system in which a negative pressure is installed.

This is the way liposuction is performed in a gentle way of fat cells in surplus. These do not have the ability to multiply, the method is final and adipose tissue no longer reappears. 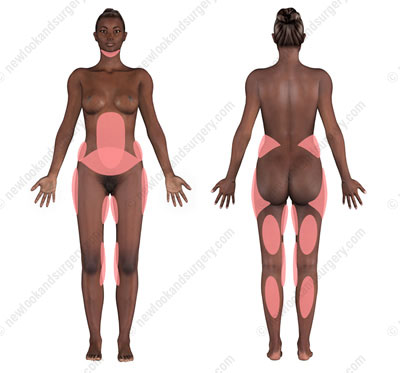 Before you arrive in Tunisia and as with any surgery, a checkup is required before the procedure of liposuction in Tunisia.

There is no formal indication relating against tobacco, but its abstinence is strongly advised to allow more rapid healing and without incident.

During the ten days preceding the operation, Stopping any aspirin based treatment is indicated.

On arrival in Tunisia and after your admission to the aesthetic clinic, your cosmetic surgeon, Dr. Chiraz Bouzguenda will meet with you to examine you and give you all the information on the procedure of liposuction and surgical suites. A pre-anesthetic consultation will take place as well.

Type of anesthesia and hospital stay for liposuction in Tunisia


This intervention is a surgical procedure in itself, a general anesthetic is usually necessary.

Unusually for a small liposuction area, local anesthesia might be sufficient.


According to the fat to be removed, there must be a hospital stay of one to two nights:

Liposuction and other cosmetic surgery procedures

Liposuction can and is often associated with other cosmetic surgical procedures:

Surgical techniques are not the same from one surgeon to another. Gestures and technique may vary and your plastic surgeon is the only judge to practice the most appropriate technique depending on the case and to obtain the best possible result.

However, the different liposuction techniques present some common gestures:

The hazards of liposuction are thankfully minimal. The results usually give great satisfaction to patients. However, we must be aware of potential and unpredictable risks.


To conclude, we must understand that surgery is not to be taken lightly and that there is still a small share of hazards. However, we must not exaggerate the risks.

The results after liposuction

The final assessment of the results of liposuction can only be final after a period of between three and six months is the time it takes for the skin to shrink and the swelling to subside gradually.

Regarding small scars, it takes a minimum of one year to assess the final appearance of scars.

The price of liposuction abroad in Tunisia varies depending on the number of areas to be treated. It is an affordable and cheap prices compared to prices in UK and Europe.

Do not hesitate to ask your quotation and price for your liposuction abroad in Tunisia.