An inverted nipple or invaginated nipple is a malformation of the nipple, resulting in an invisible nipple or hardly visible. The nipple is then buried within the breast instead of being curved outwardly.

This malformation has a psychological impact, source of complex and functional preventing breastfeeding.

The purpose of the inverted nipple surgery abroad is to give the breasts the harmony missed with the nipples buried inside the breast.

What are the invaginated or inverted nipples?

An invaginated nipple, nipple also called umbilicate, is a malformation of the nipple, resulting in an invisible nipple or hardly visible. The nipple is then buried within the breast instead of being curved outwardly.

This defect affects about 10% of women and 90% in both breasts are concerned.

The invaginated nipples have a triple impact: 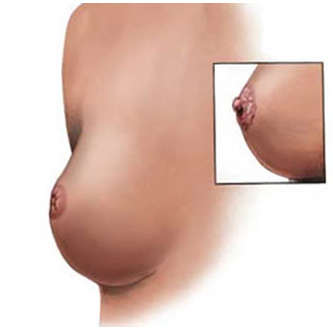 Inverted nipples are caused by retraction of the nipple inward by shortness of breast milk ducts (by which flow secretions during breastfeeding).

The invaginated nipples may be the result of:

There are three stages of umbilication:

Stage invaginated nipple may be the same on both sides or different from one side to another.

Type of anesthesia and hospitalization

An ultrasound and / or preoperative mammogram are systematic in women over 35 or who have breast cancer risk factors.

The treatment of invaginated or inverted nipples is a surgical treatment.

Medical treatment by hyaluronic acid or traction is completely ineffective and illogical!!

This is a definite technique, guaranteeing a stable income and having no risk of recurrence.

The procedure takes between 30-45 minutes.

Are there scars after inverted nipples correction?

There are scars that are discrete and which completely fade with time.

With the first technique, there is a small scar almost invisible to the base of the nipple. With the technique of the flaps, there is a horizontal scar in the middle of the areola in addition which can be an inconspicuous at first, but after that fades completely.

What are the usual postoperative of inverted nipples correction surgery?

What is the outcome of surgery of inverted nipples?

The result is immediate and definitive with technique shreds. The scars fade and sensitivity reappears.

The objective of this intervention is that breasts are the harmony that could not be felt with the nipples tucked inside the breast.

You should know that correcting invaginated nipples may disrupt future breastfeeding.

What are the risks of invaginated nipples surgery?

In all, one should not overstate the risks, but just be aware that surgery, even seemingly simple, always has a small share of hazards.